Cold and flu season is upon us and this year we have added dangers of SARS-CoV-2 (Covid-19).

Echinaforce's potent antiviral, anti-inflammatory and antibacterial properties have been proven to significantly prevent and relieve symptoms caused by a broad range of enveloped respiratory virus infections. These include rhinovirus, herpes simplex, influenza A/B, respiratory syncytial virus, parainfluenza and members of the coronavirus family.1,2

A recent in-vitro study, published in the Virology Journal, explored the impact of Echinaforce® against enveloped viruses, including members of the coronavirus family such as MERS, SARS-CoV-1, and common cold HCoV-229E.3

While authors conclude that 'Echinaforce®, could be effective as preventative treatment for all CoVs due to their structural similarities',* these results have yet to be confirmed in human clinical trials.

We are continuing our research in this field on a large scale (human) controlled clinical trial and hope to have results as to the effect on humans in the next year.

Now, more than ever, it is imperative to remember that the best form of prevention for viral infections is a strong immune system.

Over the decades, Echinaforce® has undergone more than 30 clinical trials ranging from in-vitro to randomized, double-blind, placebo-controlled and has a long-standing reputation for efficacy and safety.

To protect you and your family, Echinaforce® can be taken daily up to 4 months.4 It works by effectively modulating the immune system to help reduce the inflammatory response of an attacking cold and flu virus and activates the body's antiviral defenses to prevent infection, particularly for those in higher risk categories such as the elderly, children, people under high stress levels or fatigue and smokers.5,6

Echinaforce® is officially approved by Health Canada for the following:

Echinaforce® is clinically shown to help prevent and relieve the symptoms of upper respiratory tract infections (URTI), such as the common cold and the flu. Shortens the duration of URTI. It is also used to support the immune system, especially in times of stress, lack of sleep and for smokers.

It can be taken up to 4 months daily for prevention and there are formulations that are approved for children ages 2+ as well as pregnant and nursing women.

*Disclaimer: This is preliminary research and does not suggest a clinically applicable therapeutic benefit. A.Vogel follows and supports Health Canada guidelines in the battle against COVID-19. 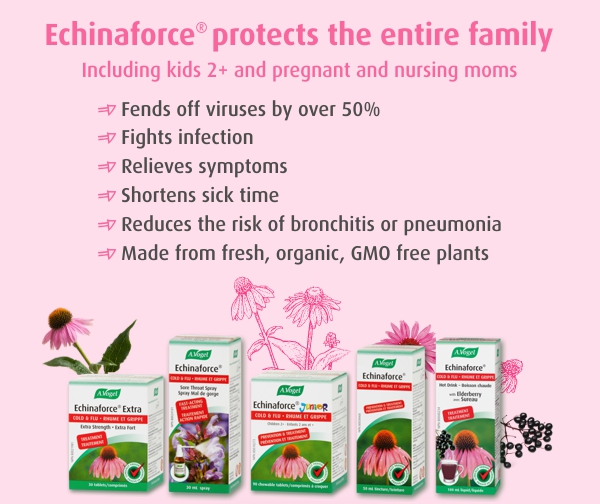 Made with 400 mg of Fresh Echinacea tincture per tablet. Prevent colds, get your immune system …
More info