How to cook peppers

Peppers are commonly eaten raw as they are sweet and refreshing, making them a great addition to salads and other dishes. They are also incredibly versatile and can be cooked in many different ways.

Although the seeds of peppers can be eaten, most people choose to remove the seeds of sweet peppers, as they are hard and contain little flavour. The seeds of hot or chilli peppers contain high levels of capsaicin, so if you are looking to pack a punch, include the chilli seeds in the recipes. 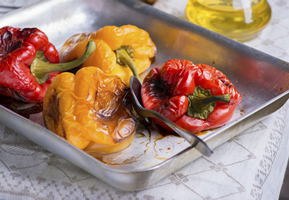 Roasting peppers is extremely popular, as it brings out the juicy sweet flavour of the peppers. To roast peppers, pre-heat the oven to 220ᵒC (425 °F), and roast whole peppers for approximately 20 minutes, reducing the time if you have cut the peppers first.

Coating the skin of the peppers with a little oil before cooking helps to create a brown, crispy skin. Turn the peppers periodically while cooking to ensure an even browning of the skin. The peppers will be ready once the skin is bubbling and slightly peeling away from the flesh of the pepper. 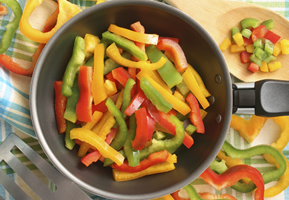 Peppers are a popular addition to stir-fries, and not just because they add a splash of colour to the dish. When stir-frying, peppers are usually cut into small pieces and fried over a medium to high heat. Heat the oil in a pan first until it is sizzling before adding the pepper pieces to the pan, then move the peppers around continuously for about 5 minutes; or until the skin is turning crisp, and the flesh tender. 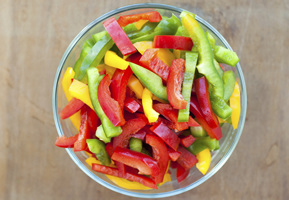 Boiling or steaming peppers is not as common as roasting or frying, but they shouldn’t be neglected as cooking methods for peppers. Steaming in particular, helps to retain the nutrients in the pepper. Generally, peppers are cut into pieces or strips before being boiled or steamed. Boiled or steamed peppers should be tender, but not cooked long enough that they begin to lose their colour. Boiling peppers will take approximately 5 minutes, while steaming will take slightly longer, up to 15 minutes.