A randomised, controlled, multicenter clinical trial followed 473 people with influenza over 10 days, comparing the outcomes of treatment of the two medicines; Echinaforce® Hot Drink (over 10 days) or Oseltamivir (over 5 days followed by 5 days placebo). Nasal secretions were collected at first visit to help define the period of highest influenzal activity. 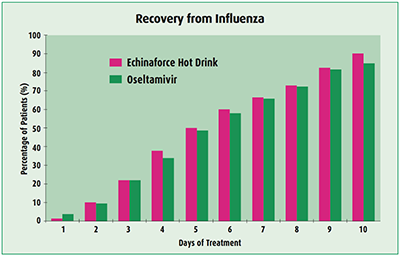 The incidence of complications was also measured. In the Oseltamivir group, pneumonia, sinusitis, bronchitis and other complications occurred at a rate of 6.5% compared to 2.5% in the Echinaforce® Hot Drink group. Regarding gastrointestinal adverse events Echinaforce Hot Drink was favoured with 5 times fewer reports on vomiting, nausea and diarrhea. 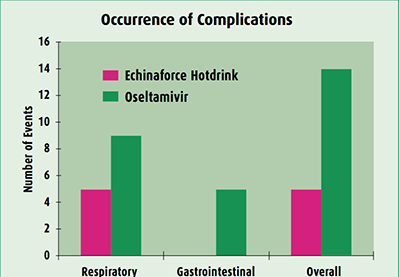 Dr. Peter Fisher, Royal London Hospital for Integrated Medicine, said: “Neuraminidase inhibitors such as Oseltamivir are the current ‘gold standard’ for flu treatment, but they have significant limitations and side effects. Despite different modes of action, we found Echinaforce Hot Drink to be as effective as the chemical gold standard but with a better safety profile.”

Echinaforce Hot Drink is readily available over-the-counter in pharmacies and health food shops. Since early treatment improves the outcome of flu this makes it a very attractive treatment option.

Dr. Andy Suter (Head of Medical Department, A. Vogel Bioforce AG, Switzerland):
“We’re delighted that the new research not only shows the herb’s efficacy in typical cold and flus but the role it plays in favourable illness progression and consequent reduction of secondary complications. We also see that treatment effects vary greatly between different Echinacea products and cautious manufacturing of fresh plant material seems to be key. 3”