Prostate 1 prevents and relieves benign prostate hyperplasia (BPH) symptoms. Only 1 capsule a day. All symptoms improved by 40% after only 8 weeks

The most common health problem is the simple enlargement of the prostate.

Symptoms of prostate enlargement become more common with age and by the age of 70, the majority of men will show signs of the problem. 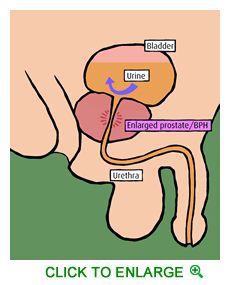 An enlarged prostate, also known as BPH (Benign Prostatic Hyperplasia or Hypertrophy) is a common problem and it is estimated that the condition affects 50% of men over 50 years of age. Symptoms of an enlarged prostate include:

Prostate enlargement is not usually a serious problem but symptoms experienced can affect a man’s quality of life by interrupting his sleep (and that of his partner), and the inconvenience of always needing the toilet, especially when on days out or travelling.

There are now a variety of ways of treating an enlarged prostate, including the use of medicines prescribed by the doctor as well as surgery. The condition can also be treated using Saw Palmetto herb and this is gaining popularity, particularly in men seeking an alternative to the more conventional methods of treatment.

This is the prostate problem that is often in the news. Prostate cancer is the most common type of cancer found in men and accounts for up to 24% new cases of cancer in Canada. The problem occurs more frequently in men over 70 years of age and those of African or Afro-Caribbean descent.

Prostate cancer often does not give rise to symptoms and when it does, these can appear identical to symptoms of prostate enlargement which is also more commonly seen in the older man.

It is because of this that, if you are experiencing bladder symptoms and think that you have an enlarged prostate, you must get the diagnosis confirmed by your doctor who will also perform tests to exclude prostate cancer:

If these tests are inconclusive, your doctor may refer you to an urologist at your local hospital for specialist opinion and further tests.

Prostate cancer, especially if detected early enough, can be cured using modern cancer therapies. This is the reason that it is part and parcel of screening tests and examinations.

Unlike the enlarged prostate and prostate cancer, prostatitis is a condition which affects men of all ages. Although more common in those between 20 and 40 years of age, the problem can also affect the older man.

The cause of prostatitis is poorly understood. What we know is that the prostate becomes inflamed and it used to be thought that this was due to infection – one of the treatments recommended for this problem in the past was antibiotics.

However, many cases of prostatitis do not show any evidence of infection and it is now thought that other triggers of inflammation (including an autoimmune response) may be responsible.

I have been diagnosed with an enlarged prostate, and have been prescribed Finasteride, which is giving me horrible side effects. Can you give me some info on your product? I have tried another herbal product but again this gave me severe stomach problems.

Saw Palmetto has been traditionally used for the relief of symptoms of an enlarged prostate. Side ...
Read more

I have just had the left lobe of my prostate removed and was chatting to a friend who suggested I try Saw Palmetto to help with the release.

You need a definite diagnosis of enlarged prostate before taking Saw Palmetto. It is important to ...
Read more

How can exercise benefit your benign prostatic hyperplasia?