What are the symptoms of flu, how long do they last and when should I see a doctor?

The morning seems to start like any other as you prepare to tackle the day. You're about to step out the door when you get hit with the sniffles. They come and go throughout the afternoon, but it isn't until the next morning where you think something is wrong. You wake to aching muscles and within a few hours, start to feel the heat of a fever developing. You lie there feeling hot one moment and shivering the next, but you cannot do anything else to make it stop. Chances are that you and the flu virus just became roommates for the time being. Over the next week, join us as we aim to familiarize ourselves with the flu and if you still have questions, do not hesitate to contact us.

What is the flu?

The flu is an infection of the upper respiratory tract which is caused by the fast-acting and contagious influenza virus. Influenza is the formal name for the flu and this virus impacts humans all around the globe. Once an individual is contaminated by the flu, it can take between two and seven days before getting really sick. This delay is called the incubation period and is the time it takes between infection and the appearance of symptoms as the pathogen replicates and multiples. Generally, the first flu symptoms occur after two to three days.

What are the symptoms of the flu?

The symptoms associated with the common cold and the flu feel similar at the beginning:
A runny nose, a sore throat, watery eyes, coughing and sneezing. With a cold, you may feel a bit "fluish", but after a few days the symptoms usually disappear and tend to be distinctly more mild.
You can recognize a the flu by the following signs and symptoms:

Most complaints disappear after a week but the fatigue and cough can drag on for days and sometimes weeks.

Is it the flu or a cold? How do they differ?

A serious case of the common cold is often confused with the flu, especially during an epidemic. Fair enough considering how similar the symptoms can be. Do you know the difference between the flu and a cold? Thanks to our overview you will no longer be mistaken.

Just to get the main flu symptoms straight:

It is clear now that the symptoms of a serious cold and the flu are very similar. How do you know then if it is the flu?

Tips and advice with the flu

Your best weapon against the flu virus is your immune system. The higher your resistance, the smaller the chance the virus can multiply in your body. A healthy lifestyle allows you to build the defenses you need to battle the countless pathogens trying to invade the body. A few tips:

Echinaforce Extra
Research is one of the ways to demonstrate that something is effective against influenza. In a research study on 755 human adults over the course of 4 months, half taking Echinaforce and the others taking a placebo, Echinaforce was shown to reduce the risk of catching a cold or flu virus by 26%. It also helped reduce the need for co-medications such as something to help control the pain and the risk of catching another illness. It also helped protect at-risk groups including those battling stress, smokers, the sleep deprived and individuals who catch more than two colds per year, a potential sign of a weakened immune system. More info

Is it the cold or the flu?

Not only do you suffer from a sore throat, but you also feel miserable, have a fever and can't seem to shake the chills that come and go. If so, you may have the flu. Do the test and find out now!

How is the flu virus transmitted?

The flu virus is transmitted via small saliva droplets in the air. These droplets are very contagious. By breathing this contaminated air, the virus penetrates the respiratory system, where can replicate itself very quickly. It is also transmitted through direct contact (kissing, shaking hands) and indirect contact (door knob, telephone).

Are you in the “risk group”?

The flu virus can be difficult to beat. So, if at any moment you suffer from flu symptoms, taking it slow will be the best remedy as you work towards recovery. Of course, it is better to avoid the illness altogether through preventative measures. This is particularly important for people who belong to one of the following at risk groups:

For these individuals, the flu vaccine may be the best precautionary measure. Beware that in spite of the flu shot, you can still get the flu. The risk is higher if someone in close proximity has the flu.

Combat the flu with the help of this infograph!

Click below to download the infographic (PDF) and look what you can do to avoid the flu with our tips! 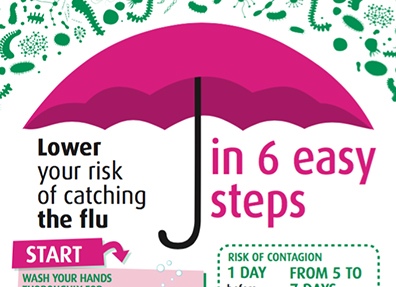 4 surprising facts about the flu

Watch the video about diminished resistance and natural support for the flu from the beautiful A.Vogel Garden.

When to see your doctor

When should you consult your primary care provider about the flu? In some cases, the flu does not go away by itself. Other diseases may occur that need to be treated more aggressively, such as pneumonia.
Please contact your general practitioner if you have the flu and:

Please contact your general practitioner if your child has the flu and a fever in the following cases:

I’m 60 and want to find out which foods and supplements are best for supporting my immune system?

The immune system can become weary as we age and as in any age group, it becomes far less efficient ...
Read more

What should I do about a persistent dry cough?

For your cough, there are two options from A.Vogel including the Santasapina Soothing Cough Syrup ...
Read more