Echinacea, beyond the controversy

What exactly is echinacea?

Echinacea is a group of flowering herbaceous plants in the daisy family. The plant was first used for medicinal purposes centuries ago by the Plains Indians of North America.

For countless generations, North America’s indigenous peoples have known about the plant’s medicinal qualities and, in the 19th century, they passed on their traditional knowledge to practitioners of eclectic medicine.   By the early 20th century these eclectic physicians had all but disappeared and it wasn’t until Swiss phytotherapist, nutritionist and writer Alfred Vogel began taking an interest in echinacea that the plant came back to the fore.

In the 1950s, Alfred Vogel travelled to the United States and visited the Grand Chief of the Dakota Indians, Black Elk, who taught his new friend about the qualities of purple echinacea (Echinacea purpurea). In the early 1960s, the first echinacea-based product to return to the Canadian market was A.Vogel’s Echinaforce.

What are its active ingredients?

Echinacea is a highly complex medicinal plant that contains several families of active molecules. Of all its active ingredients, the most powerful ones are the alkamides (or alkylamides).(1) That being said, the synergy between echinacea’s active ingredients is more effective than the effects of its individual molecules combined. That’s what Jürg Gertsch of University of Bern, in Switzerland, calls “smart mixtures.”(2)

According to Dr. Rudolf Bauer, a professor at Austria’s University of Graz Institute of Pharmaceutical Sciences, Department of Pharmacognosy, and a world-leading expert in the standardization of echinacea extracts, a good echinacea extract should contain alkamides, cichoric acid, polysaccharides and echinacosides.(3)

Pharmacist and natural health products consultant Jean-Yves Dionne concurs: “The overall effect of many medicinal plants—for example, valerian, passionflower and echinacea—cannot be explained by the presence of a single active ingredient. Hence the term polymolecular therapy.”

These complete extracts are therefore more interesting, from a therapeutic perspective, than standardized extracts containing only one of these molecular families—standardized echinacea extracts typically guarantee a certain quantity of echinacosides, while failing to specify any other molecules.

Researchers have compared echinacea extracts made using fresh plants and those made with dried ones. They’ve noted that the concentrations of all active ingredients are higher in extracts made using fresh plants. For example, the concentration of alkylamides is 2.5 times higher in fresh echinacea extract (79.9 mg/100 g) than in the dried one (30 mg/100 g).(4)

What are its mechanisms of action?

Echinacea yields a range of therapeutic effects that are useful in preventing and treating cold and flu. Studies of Echinaforce extract described echinacea’s actions:

Combined, these effects explain why echinacea can prevent cold and flu and reduce the intensity and duration of symptoms.

Once the body is infected by a respiratory virus such as a rhinovirus or influenza, the immune system reacts in one of two ways:(7)

One of echinacea’s most interesting features is its ability to modulate the immune response by reducing the expression of inflammatory cytokines(5,6) and increasing the expression of antiviral and anti-inflammatory cytokines.(7) In so doing, it increases the immune system’s ability to defend itself against viruses and other intruders, while reducing the symptoms triggered by the body’s defensive actions.

In addition to stimulating the body’s defences, echinacea has the ability to attack pathogens directly.

Researchers evaluated echinacea’s ability to inhibit and kill the viruses responsible for the most common upper respiratory tract infections (URTIs). They showed that, in vitro, at concentrations similar to or lower than those obtained through the regular consumption of Echinaforce, echinacea inhibits several flu strains (H5N1, H7N7 and H1N1) (see figure 1).(8)

Another study showed that Echinaforce extract inhibits other viruses: rhinovirus 1A and 14, influenza, respiratory syncytial virus (RSV), adenovirus 3 and 11, and herpes simplex 1.(9) 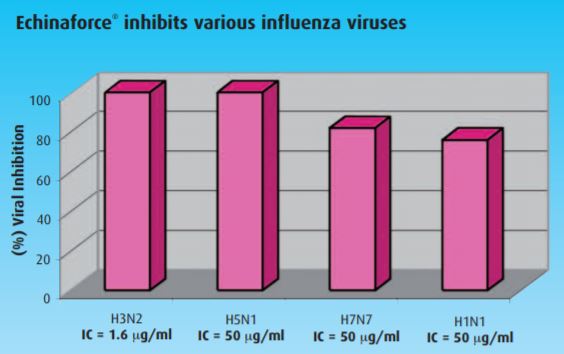 Researchers have also compared the effectiveness of Echinaforce to that of a known neuramidase-inhibiting antiviral, oseltamivir (Tamiflu). They showed that Echinaforce is more effective than oseltamivir and does not lead to resistance, which cannot be said of oseltamivir (see figure 2).(8) 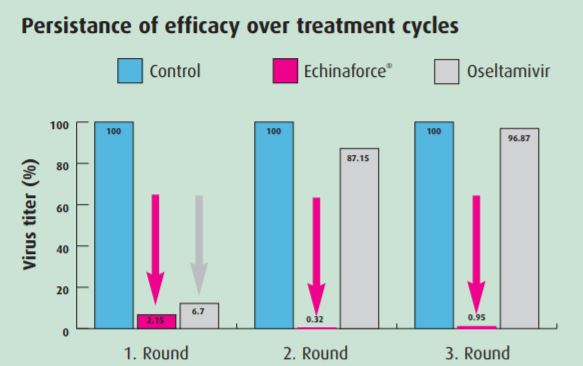 Echinacea also directly attacks some of the bacteria responsible for respiratory infections and inhibits their ability to trigger an inflammatory response. In vitro, Echinaforce inhibits Group A Streptococcus pyogenes (responsible for pharyngitis), Hemophilus influenzae and Legionella pneumophila.(10)

It’s well known that in vitro studies sometimes do not hold up when extended to studies on humans. To address this important issue, researchers around the world conducted studies using volunteers in order to examine echinacea’s effectiveness.

The media often report on the findings of these studies: one day, you hear that echinacea works wonders against colds and the flu; the next day, you find out that echinacea is useless.

How did the controversy arise?

One of the most important factors in the outcome of a study of this kind is the quality of the extract used. So the first thing to do is find out whether the extract that was studied was made using:

All these factors can cause variations in the concentration of active ingredients and on extract quality and effectiveness. This reality affects both the results obtained by studies and the quality of the products on store shelves.

What do the experts say?

Despite the controversy, there is consensus among the experts: echinacea is effective and, when taken preventively, can reduce the overall number of colds by 55%.(12) Jean-Yves Dionne notes that, to be effective, “echinacea needs to be taken at the very first sign of symptoms, and at the right dosage. And when it is, it will reduce the intensity of symptoms and the duration of the illness.”

Three clinical studies carried out with Echinaforce have shown that this particular extract is both effective and very well tolerated.(13-15) Furthermore, volunteers who received Echinaforce did not have more adverse effects than those who received a placebo.(14, 15)

Are all echinacea products made equal?

No, product quality varies greatly. Just because a product was assigned a natural product number (NPN) thanks to an NHPD monograph, it doesn’t mean that the product’s effectiveness is guaranteed.

According to Jean-Yves Dionne, “The problem with choosing an echinacea product is that it’s very hard to differentiate between a commercial copycat product and an effective extract. That’s why I tell my patients to choose an organic product if possible, one whose manufacturer grows its own plants and conducts clinical studies. That way, you’ll avoid lower-quality products that hitch a ride on other companies’ science, while supporting companies that conduct actual science and focus on offering quality products.”

A number of natural health products based on medicinal plant extracts specify, on the label, the percentage of an active ingredient. Is this always a guarantee of quality?

The goal of standardizing medicinal plant extracts is to achieve replicability batch after batch. When standardizing an extract based on a single molecule, the manufacturer runs the risk of not obtaining sufficiently high concentrations of secondary substances, which are potentially just as important as the primary ones.

One approach to standardization allows for a broader level of replicability batch after batch despite the natural variations in echinacea plants. This process allows for the complete characterization of the plant. Consequently, not only is the key marker (echinacoside) present, but all the so-called secondary substances (polysaccharides, alkylamides, etc.) are too. This process, referred to as holistic standardization, consists, among other things, of carrying out a full analysis of every batch of extract (specifically via HPLC chromatography), followed by carefully blending different batches to obtain consistent concentrations of all active ingredients.(4) This is the process used in the production of Echinaforce, making it a reliable, consistent product year after year.

What are the potential adverse effects?

The adverse effects of echinacea are just as rare as those of the placebo: (13-15)

Are there any potential or reported interactions?

Clinically, no interactions have been reported. In vitro, however, researchers discovered that certain molecules found in echinacea could induce cytochrome 3A4, which is used to metabolize a number of medications. However, the concentration of these molecules is not high enough for them to have any measurable impact.(16-18)

What are the contraindications or precautions to take?

An allergy to echinacea or other plants of the asteraceae family is the only confirmed contraindication. However, given that echinacea is an immunomodulator, some doubt remains regarding its safety in people with a compromised immune system, in which case it is best avoided.

Some authors state that echinacea is contraindicated for patients with an autoimmune disease.(19) Echinacea’s mechanisms of action do not support such a warning, but professional judgment should nonetheless be exercised.

Echinacea is considered safe during pregnancy.(20,21)

Given that no actual or theoretical interaction has been reported with echinacea, combining it with other products is considered safe.

Who can take echinacea?

No age or other restrictions apply to echinacea except for the contraindications and precautions described above and on current packaging.

An Echinaforce for everyone

Influenza outbreaks higher than ever in children and young adults