The kingdom of fresh medicinal plants

1 reviews  Liked what you read? Rate this page

As early as the 1930s, Swiss naturopath Alfred Vogel (1902-1996) observed that medicinal preparations made from fresh plants had deeper and broader effects compared to the usual remedies of the time, which were made from dried plants. This observation which evolved into a conviction over many years of practice, can today be confirmed using modern analysis and measurement techniques.

Anyone who has made a mug of tea using fresh peppermint leaves, comparing it against another made using dried mint, can easily understand why Alfred Vogel made it a principle to produce herbal medicines from fresh plant material wherever possible.

However, such an approach was unheard of when Vogel began to produce his remedies from fresh plants and is still novel to this day.

For many herbal brands, the starting point in their manufacturing process is dried herbs (technically known as drugs although the term is more commonly used to mean synthetic medicines) found in large sacks in their warehouse. These are often transported over long distances and stored over time, which may result in undesirable oxidation processes. They also have to undergo numerous tests proving their authenticity, eliminating the presence of pesticides, heavy metals and other contaminants.

By the time other companies start processing their dried herbs, Bioforce AG, the herbal manufacturer founded by Alfred Vogel in 1963, will have completed many of the first steps in their extraction process. The company adopts one key maxim – do everything yourself – from sowing seeds, planting, cultivation and nurturing of plants to harvesting and processing. All satisfy the high quality requirements imposed internally.

Why use fresh plants instead of dried ones? 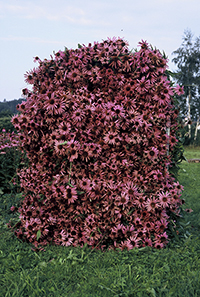 Apart from the poorer starting conditions for dried plant material resulting from the use of fertilisers, chemical treatment and fumigation, the drying process disrupts the ‘structure‘ of plant's natural compounds.

For example, volatile substances such as essential oils may be lost, other compounds can degrade, denature or interact in a number of different ways. Examples based on the purple coneflower (Echinacea purpurea) and hawthorn (Crataegus monogyna/C. laevigata) demonstrate that levels of plant compounds obtained from fresh plants is higher than when dried plant material is used.

With the purple coneflower (Echinacea purpurea), it can be shown that the content of alkylamides, which are important for the immunomodulatory and anti-inflammatory effect, is twice as high in fresh plant extracts compared to tinctures made from dried plants. Similar studies have been carried out on many other plant species.

Fresh plant extracts have also been shown to be more stable. Two separate tinctures were made, one from a portion of fresh hawthorn berries and the other from an equal portion of dried berries from the same bush. Photometric measurements were taken for proanthocyanidins and phenols, considered to be key factors for efficacy, over time. These show that, during storage, the concentration of active substances in tinctures made from fresh hawthorn remains at a constant high level, while that in tinctures made from dried plants falls.

"All active and accompanying substances in plants have a part to play. They complement each other and act as a whole. It is important to grow healthy seeds in healthy soil without using pesticides and to process the plants carefully and without adding toxic or environmentally harmful auxiliaries to the medicine. The remedy should, wherever possible and appropriate, be produced from fresh plants. "

Before we decide on which medicinal herb to use, many years of research is needed in order to find suitable varieties of plants.

Firstly, the plants must contain the required active substances in the most balanced combination possible. Next they should be well suited to the climatic conditions present and thrive without the need for synthetic fertilisers present, and lastly they need to be resistant to infection and infestation so that there is no need for insecticides, pesticides and fungicides.

During this process, new discoveries are made and new ideas implemented. Some of the plants are retained in order to obtain seeds for the future as controlled cultivation can result in a high content of effective constituents.

The search for suitable seeds

When Bioforce AG decided to manufacture a new fresh plant product from St. John's Wort in the mid-1990s, our experts went in search of the most suitable seeds with the aim of ensuring that controlled organic cultivation would lead to the best quality product from the outset.

As it is the company's stated aim to use fresh plants from our own cultivations, there was never any question of purchasing or importing dried St. John's Wort.

During a two-year test series, suitable St. John’s Wort candidates were identified. This involved 24 different St. John's Wort seeds (collected from the wild, obtained from botanical gardens and suppliers) grown at various locations in around four years of research.

Two varieties of St. John's Wort were found to produce high yields and were floriferous (had many flowers), suitable for harvesting by hand and resistant to disease. However, the most important criterion was the rich range of pharmacologically relevant constituents.

The search for the best seeds for St. John's Wort also drew on external expertise and is just one example of the commitment, expense and care taken by Bioforce AG in its endeavours to achieve the best possible end product.

A gift from an Native American medicine man

When visiting an Native American reservation in South Dakota (USA) in 1953, Alfred Vogel was given seeds of the purple coneflower (Echinacea purpurea) as a gift by the Sioux medicine man, Ben Black Elk.

Back in Switzerland, Vogel succeeded in growing and propagating echiancea plants from these seeds. Today, the same species is still cultivated from the company's own seeds, in its own fields. Detailed studies have shown this method to be extremely successful in terms of yield, robustness and content of plant compounds. The best seeds can sometimes be the result of a gift.

The way herbs are cultivated has a distinct effect on what the plants contain. Levels of medicinal compounds vary depending on the weather, the time of year, the health of the soil, whether or not fertilisers are used and the time of harvest Whilst no one can control the weather, all other factors can be influenced.

The avoidance of large-scale monocrops, the careful selection of the seeds and seedlings, choosing the right sites and the natural optimisation of the soil help guarantee that we have access to top quality plant material.

For saw palmetto from Florida (for symptoms of early benign prostate hyperplasia) and devil's claw from the Kalahari Desert in Namibia (for degenerative disorders of the musculoskeletal system), Bioforce AG has for many years chosen to engage in sustainable cultivation thus avoiding the over-exploitation of natural resources.

In most cases, plants are harvested, in accordance with the company's principles, by hand or using light equipment. This process (which in our high-tech era, regularly creates astonishment because it is so labour intensive) is based on the philosophy of the naturopath Alfred Vogel, who advocated as much manual work as possible in place of machinery when harvesting and processing the products.

The renunciation of heavy harvesting machinery is not only good for the harvested plants, but is also good for their ‘offspring‘, because the soil would otherwise be too highly compacted. In the heavy and wet soils of Switzerland in particular, this would negatively affect the quality of the life within the soil, and consequently the quality of the next harvest.

As already mentioned, the constituents of plants vary depending on the prevailing conditions while they are growing. Analytical empirical values are used to determine the optimum time for harvesting, with production batches over many years of harvesting used as the determining criterion.

Careful processing of the fresh plants normally starts no later than 24 hours after they have been harvested.

“this page was helpful. pliz help with principles of phytotherapy that govern it's practice”